ProStart is back! | Washington Hospitality Association 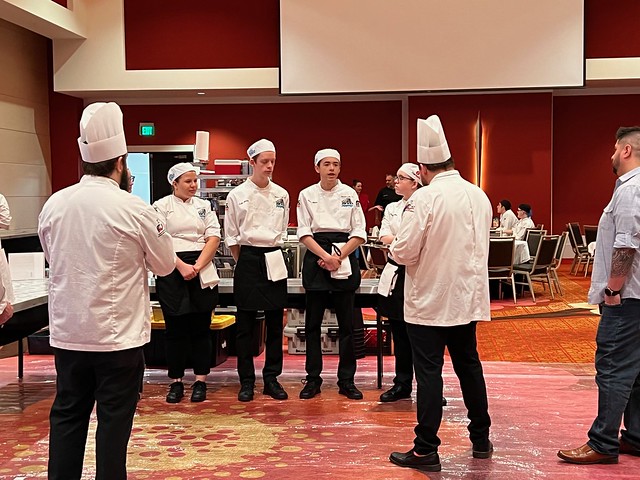 The competition was hot at the Davenport Grand Hotel in Spokane, as the hotel welcomed the 2022 ProStart Invitational.

Six teams battled for culinary dominance with a trip to Washington, D.C., on the line for the first time since 2019.

ProStart is a hands-on, real-world, career-connected learning program, and students are mentored by industry leaders. Students not only receive career and technical education credits, but their industry mentors open doors for them when they are ready to enter the workforce.

The competition is not for the faint of heart. Each team has 60 minutes to complete a meal of an appetizer, main course and dessert. They must do it without electricity or running water. Not only do they rely on propane stoves, but hand-cranked blenders and ice cream machines.

The students must also display their knife skills, what they know about sanitation, kitchen safety and teamwork.

Ingenuity is also a factor, as students must problem-solve how to make sure all their meals are cooked within the allowed 60 minutes. The students at Bonney Lake High School placed a metal tray over their propane burner to fit more than one pot on the flame at once.

This year, the competing teams were:

Newport High also sent over the only management team and they won an automatic trip to the national competition in Washington D.C.

Cynthia Monroe has been the culinary arts instructor at the NewTech Skills Center in Spokane for four years. This year was the first time she had acted as a judge for the competition, with the tough job of tasting desserts.

“I’m looking for different tastes and textures,” she said, adding that she was also looking for consistency in the plating of the dish. She also noted that baking is different from savory cooking.

“A recipe is a formula in baking,” she said, noting the science behind it.

Teaching culinary arts to students through the pandemic has been a tough job for teachers. Ashley Grow has been at Ferris High School for three years, and she described the last two of them as intense. The students took the course because they wanted to cook but they couldn’t do that while taking those classes through Zoom and Teams. Grow sent a monthly kit to the students or the recipes to the parents so the students could cook alongside her over their computers.

Grow’s team didn’t decide to compete until January. In a normal year, they would have started practicing much sooner. The deciding factor in her team was one of her students, Aahanah Fischer. A senior this year, Fischer competed in ProStart when she was a freshman and really wanted to do it this year.

“I told her we can do it, but you have to take leadership,” Grow said. Fischer came through. She designed the menu; she taught the team the rules. It was extra challenging because the team didn’t have a mentor chef this year. Grow said she would have felt bad asking a chef to do it when the industry had to struggle so hard during the pandemic. But Fischer runs her own catering business on the side.

ProStart includes a curriculum in management, as well as culinary skills. This year, the team from Newport High School in Bellevue was the only management team, so they had the opportunity to learn what to improve upon for their national competition.

“We want to see you come back with some big championships,” said Phil Costello, owner-operator of Zip’s Drive-In in Spokane. Costello was joined by Brian Moreno, the owner-operator of McDonald’s Hamburgers in Othello.

This year, Bonney Lake High School took home first place and the opportunity to compete in Washington, D.C., on May 6-8. Newport High Team 1 came in second place, and North Central came in third.